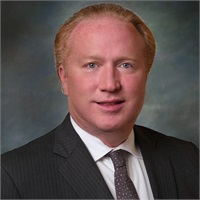 Rick Wagner began working in the financial services industry in October of 1987 while attending Davenport College in Grand Rapids, MI. Their job placement office referred him to a management training program for a Wall Street investment firm, First Investors Corporation. The following January, Rick passed his licensing exams and officially began his new career as a financial advisor.

In the spring of 1992, Rick decided it was time to move on, so he began to interview with a number of brokerage firms in the West Michigan area. His search criteria was simple: he wanted to continue his career at a full service brokerage firm that also had an excellent reputation. He certainly found that at Centennial Securities. Rick considers it both an honor and a blessing to be associated with such an outstanding firm. He wholeheartedly believes that most advisors in this business cannot say that, but he can, and he is proud to say it every chance he gets.

Rick would say one reason, if not the main reason, he has lasted so long in this industry – especially when so many others fail – is because he is truly passionate about what he does: managing his clients’ money in the risk capital markets. Even though so much of his time is consumed by this profession, he really doesn’t view what he does as work because he enjoys doing it so much. He considers himself very fortunate.

His practice has evolved into two main areas of service. The first is wealth management, with an emphasis on active portfolio management. The second is institutional fixed income (bonds) trading for other financial institutions.

In the past three decades, Rick has witnessed both the longest-running bull market and one of the worst bear markets in history. He has learned that risk will always be present, and the key is to manage that risk so that you, as one of his clients, can sleep well at night.

Rick is currently accepting new clients and he always appreciates referrals. He welcomes the opportunity to meet with you and learn more about your specific situation and explore whether he can be of benefit to you.